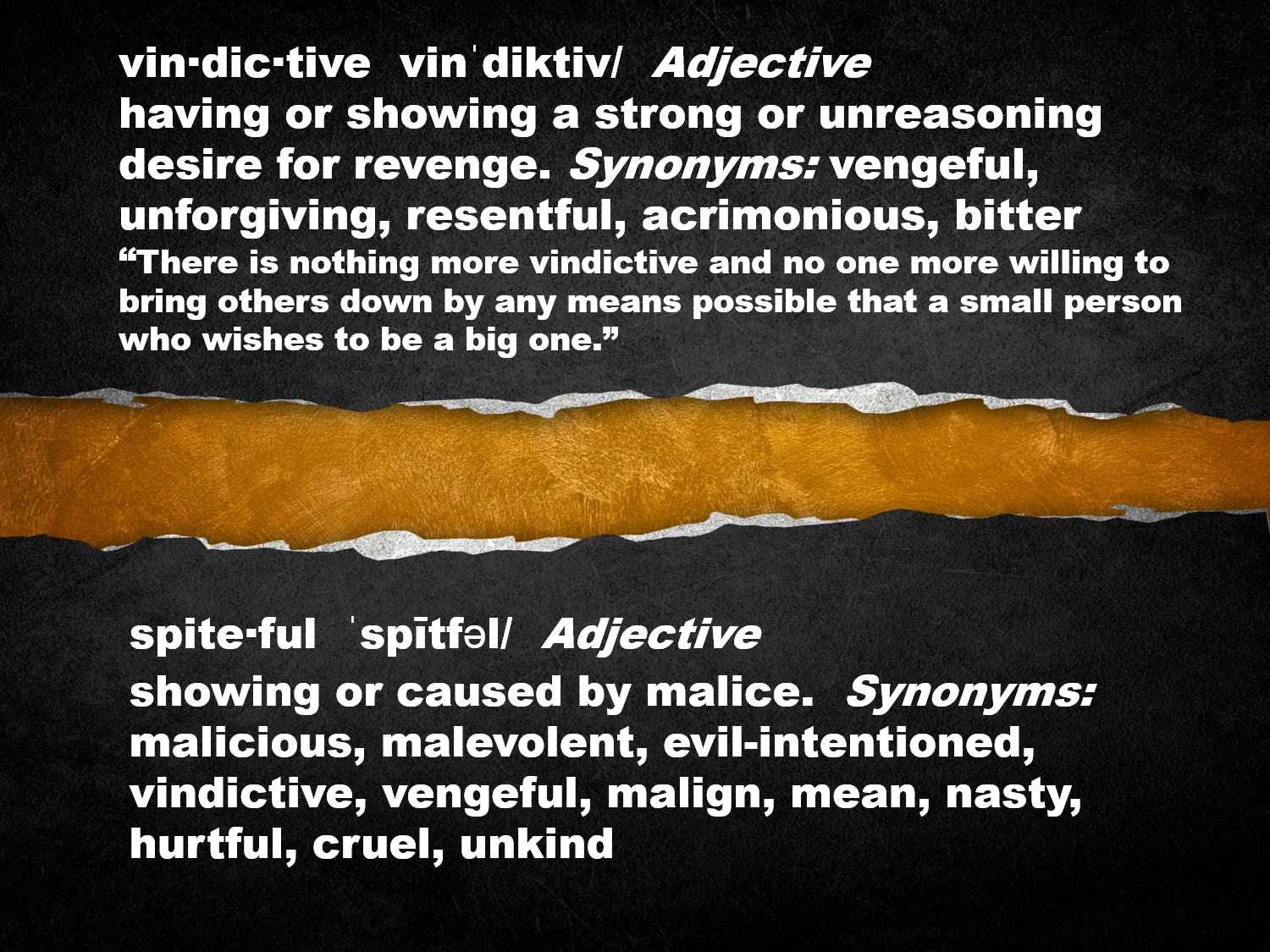 Plaintiffs allege that many of the acts committed by Archer’s Head of School, Elizabeth English were malicious (intended to harm as opposed to accomplishing a legitimate educational goal).

Though Ms. English and the Board would still be liable for intentional infliction of emotional harm even if there was no malice (it is enough that the defendants knew that the harm was likely), there are two reasons malice is important in this case.

First, it establishes an even stronger justification for the imposition of substantial punitive damages.

Second, the animosity for Michael Josephson underlying this malice and the circumstances demonstrating this animosity provides a context that explains why Ms. English would take a minor disciplinary matter and use it as a pretext to punish Mr. Josephson by hurting his children, including one who had done absolutely nothing to justify even the slightest sanction.

The plaintiff’s believe there is ample compelling evidence that her animosity grew deeper and darker resulting in escalating vindictiveness and malice. The animosity, rooted in a confrontation with Mr. Josephson that Ms. English initiated in 2009 (see the roots of malice under the “Crucial Issues” tab) intensified when it it became apparent that Mr. Josephson intended to persist in his efforts to protect his child (Child 1 ) from decisions that he and Anne, as well as Child 1’s psychologist, believed would cause severe and lasting emotional harm.

Though Mr. Josephson’s advocacy, including consideration of options to seek board or judicial review of her decisions were respectful and legal, in an apparent need to deter him or any other parent from opposing her in any way, she took the unprecedented (it violated Archer philosophy and past practices) step of banishing a second, totally innocent daughter (Child 2), from Archer simply because her father was advocating on behalf of her sister, Child 1.

What’s more the evidence shows Ms. English was intransigent in her unwillingness to consider alternative sanctions so that she could terminate Child 2’s ability to complete her education at Archer 2 in retaliation for Mr. Josephson’s challenge to her authority. She did this despite knowing from C2’s mother,  Anne Josephson, still a member of the Board, that as Child 2 had recently acknowledged to classmates and teachers that she was gay, forcing her to go to an new school without the support or understanding of lifelong friends and special teachers would be devastating and traumatic.

Plaintiff’s informed the Board of these facts when, as part of their offer to settle their claims against Archer and the Board. They appealed to the board to reverse this completely unnecessary and patently cruel decision.

Knowing the circumstances and the consequences, instead of repudiating the decision, the Board ratified it and, in fact, several of the Board members actually participated in making the decision.

These paragraphs were in Mr. Kosnett’s April 29, 2014 letter to the Board of Trustees:

We respectfully submit that evaluation of our claims by the Board must be made in terms of reasonableness, appropriateness, necessity, and whether they represent the image of Archer it wants to project.

In this context, it is relevant that the evidence will show that at the root of our causes of action for the intentional torts is an autocratic leadership style employed by Ms. English that demands subservience and requires unchallenged power to create, interpret and enforce rules to preserve and enhance her sense of control. At best, these characteristics are totally inappropriate in an educational setting. At worst, this attitude leads to unlawful and improper behavior that causes severe damage to the victims and subjects Archer to massive resource draining and reputation-damaging scandals and litigation.

Need to look beneath the surface and read between the lines

It may be hard for BOT members to accept the reality that the highly intelligent, articulate and charming Ms. English they know has an entirely other side when she is dealing with subordinates, students and parents, or anyone else who may get in her way. Nevertheless, we are confident an investigation will show these characteristics are well known by many of the people who work at Archer, and by students or parents who have had the temerity to question her policies.

We are confident that a qualified investigator who can win the trust of current and, especially, recently departed faculty members will uncover a pattern of conduct characterized by intimidation and the arbitrary and capricious use of power similar to that experienced by my clients.[1]  This is precisely the kind of knowledge the BOT should have had and should have in the future.

The investigator will discover that Ms. English has a keenly developed skill to disguise her true intentions, that she completely controls her immediate subordinates by fear, and, when needed, uses them as shields for her decisions. [1] My clients will be happy to guide the investigator to particular cases of bullying and intimidation in direct response to any conduct Ms. English perceives as a challenge to her authority.

The Roots of Malice

In the hope that it would cause the board to at least commission a thorough independent investigation of the serious charge of malice,  the memorandum supporting the plaintiff’s offer to settle provided this detail:

[In 2009} At a meeting to discuss Archer’s character development efforts, Ms. English asked Mr. Josephson, President of the Josephson Institute of Ethics to conduct a survey of attitudes and behavior of Archer students. Mr. Josephson agreed to do so without charge based on the understanding that the data would be shared with parents, students, faculty and the Board to stimulate discussion and enhance Archer’s character development strategies.

Mr. Josephson conducted the survey and prepared an analytical report as well as discussion questions in October 2009. The report revealed a disturbingly high rate of cheating, drinking and drug use and Ms. English reneged on her commitment to share the information with parents, faculty and students and, through another administrator he was asked to (and he reluctantly agreed to) not reveal the data.

When Ms. English learned Mr. Josephson had been asked to deliver a program for the Archer Dads organization and that he was conducting a separate survey for that program, she apparently feared he might collect and reveal data similar the information included in the report on the survey she commissioned, she decided to “put him in his place”.

Based on completely erroneous assumptions (that she made no effort to verify), Ms. English, in the words of Archer Dad’s president, Jeffry Spitz, “ambushed” Mr. Josephson with conference call attended by several Board members. During that call Ms. English rebuked, insulted and sought to intimidate Mr. Josephson accusing him of being unprofessional and unethical in conducting another survey without her permission. One of the Board members, Cathy Helm, implied legal action if Mr. Josephson did not comply with Ms. English’s wishes.

In a tirade that lasted for more than an hour, Ms. English disregarded Mr. Josephson’s attempts to correct her false assumptions about the nature of the survey and the circumstances under which it was created. Mr. Josephson expressed his own outrage at inappropriate behavior and he insisted that Mr. Spitz be included in the conversation. When it became clear even to Ms. English that the beliefs underlying her disrespectful and defamatory accusations were wrong and irresponsible, she eventually backed off. But, instead of apologizing for her inappropriate behavior, Ms. English formed a deep animosity for Mr. Josephson that she expressed with retributive actions against Mr. Josephson’s daughters and unfounded accusations that Mr. Josephson acted improperly.