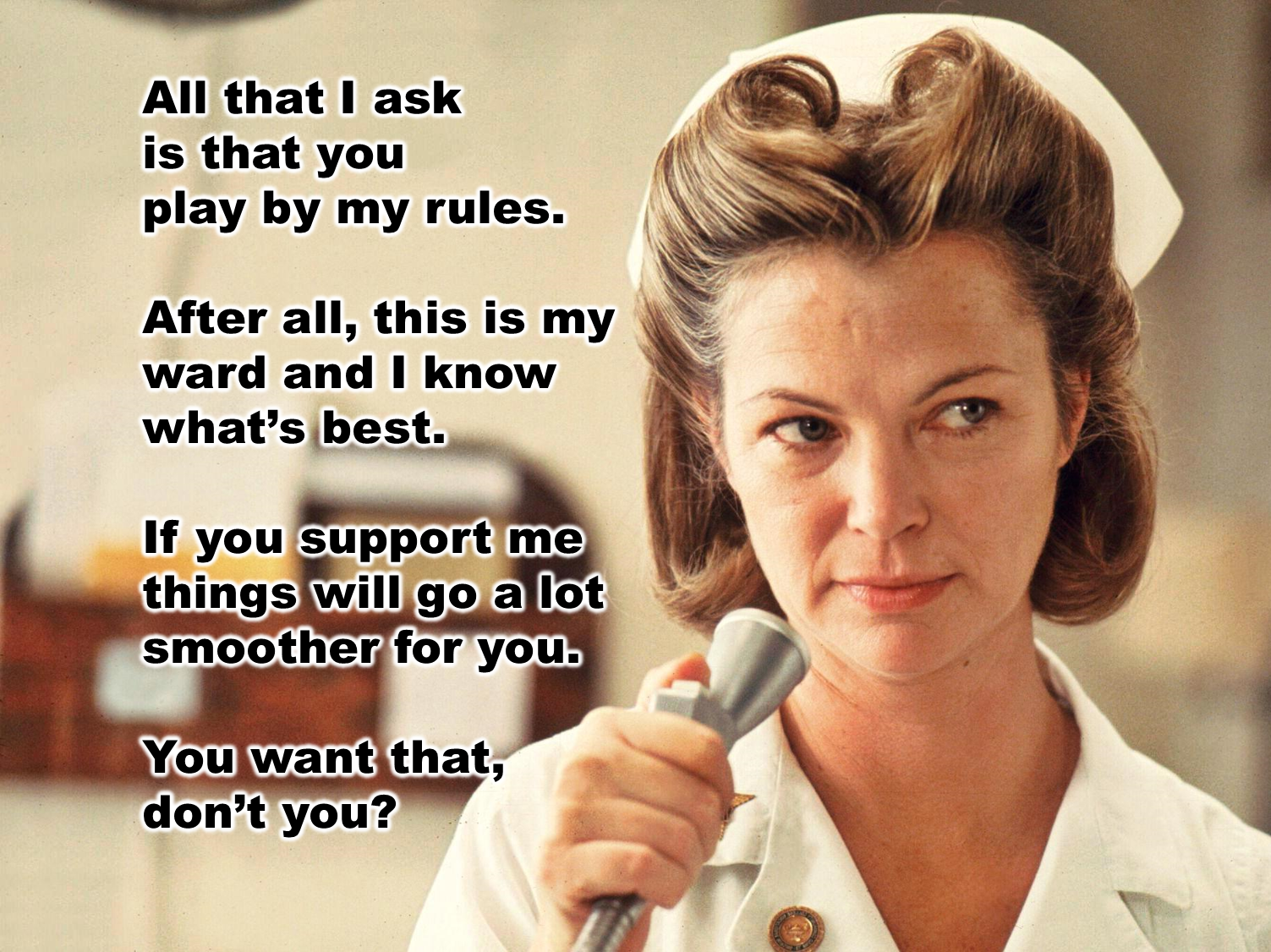 Once the controversy became known at Archer (the Josephsons were a very active well known family in the Archer community) Ms. English sought to diminish the credibility of the Josephsons and minimize the seriousness of Child 1’s fear and aversion to the process. She told administrators, teachers and parents who sought to get her to soften her position (ignoring the opinion of Child 1’s parents and a report of a licensed therapist)  that Child 1 was just being stubborn and that her parents were simply trying to get special treatment to shield her from negative consequences.

In fact, the Josephsons (Anne was a board member and Michael a prominent ethicist) were scrupulous about never seeking special treatment and supporting the imposition of whatever sanctions the school thought appropriate. (As four of their daughters went to a Archer from 6-12th grade, they had more than a few opportunities to do so.) Michael, who had written extensively about the importance of holding children accountable was particularly  hard-nosed about assuring that his children were held accountable.

Then how is it that both parents ended up going to the wall and putting everything on the line to protect Child 1 to being forced to participate in the student hearing?

Here is the back story on how the prospect of being forced to admit her lack of control and the private reasons for it became an outright phobia .

The following explanation was included in the Josephsons’ complaint:

Shortly after being informed she would be required to appear before the Honor Education Council, CHILD 1 began to develop deep and severe anxiety and fear about being forced to expose herself to her peers. During one emotional meeting with Samantha Coyne Donnel, Upper School Director (who was also CHILD  1 ‘s  school appointed personal adviser, CHILD 1  broke down emotionally while describing her escalating fear and anxiety about having to appear before classmates and other faculty to explain the circumstances leading up to her rude behavior to her math teacher. She implored Ms. Coyne to consider other sanctions if they were thought necessary. Ms. Coyne said the issue was in the hands of Ms. English.

Anne Josephson also met with Ms. Coyne and stressed that neither she nor her husband Michael opposes additional sanctions against CHILD 1 if the school thought they were needed but that requiring an emotionally fragile girl to be confronted and judged by more than a dozen adolescent peers was too harsh and could be seriously damaging.

During the winter break, Ms. Coyne informed C1 that Ms. English was firm about the requirement of the student hearing. Rather than run the risk of challenging what they believed was an unfair, unnecessary and improper ultimatum, both Anne and Michael sought to alleviate Child 1’s fears and insisted that she participate and “get it over with.”

As the return to school and the impending hearing came closer, both parents tried to prepare Child 1 to participate, Child 1 had a severe and sustained emotional breakdown of a sort never before seen by her parents. CHILD 1 expressed extremely high anxiety at the prospect of being subjected to humiliation before her peers and extreme emotional distress relating to the intimidating threat of Ms. English that if she refused to appear she would be thrown  out or forced to withdraw from ARCHER during her senior year.

The intensity and the duration of the emotional breakdown caused Michael and Anne to conclude that they needed a professional to diagnose and, if necessary, treat her condition. They immediately sought recommendations and hired a well respected psychologist who specializes in adolescent well-being to diagnose and treat CHILD 1. (Child 1 was not engaged in therapy prior to the incident and this breakdown was both surprising and “out of character.”)

On Friday, January 3, while ARCHER was still on winter break, Michael sent a letter to Ms. Coyne informing  her  that  CHILD  1 had suffered a severe emotional breakdown and that she would not attend school for the first week while she was undergoing diagnosis and treatment. He asked for a meeting with Ms. Coyne so he could update her and explore when and whether a new hearing date. would be set and whether an alternative strategy could be pursued.

Michael met with Ms. Coyne on Thursday, January 9, 2014. CHILD  1 ‘s college adviser, Heather Keddie was also present. During the meeting, Michael explained the extraordinary nature of CHILD l’s emotional condition and the failure of his and Anne’s efforts to persuade her that the process would not be as traumatic as she feared.

Michael informed Ms. Coyne that he had spoken extensively to CHILD l’s psychologist who examined and was beginning to treat CHILD 1  and that she was of the firm opinion that CHILD 1 had developed an irrational, but sincere phobia about the hearing and that if she were forced to participate it would inflict great and lasting emotional harm.

He cited the school’s commitment to non-coercive discipline and repeated the criteria Ms. Coyne outlining the goals of discipline and pointed out that, according to ARCHER’s Handbook, the student hearing process was purely discretionary and that, clearly, other means could be found to accomplish ARCHER’s disciplinary goals. Ms. Coyne was sympathetic but she said Ms. English expressly instructed her that she was not authorized to discuss any alternatives to the student hearing.

During the January 9, 2014 with Michael Josephson, Ms. Coyne indicated that, in view of the nature of the violation and CHILD 1 ‘s subsequent apology and acceptance of accountability that they should not worry since only a minor sanction was appropriate. She explicitly ruled out a suspension as a sanction for CHILD 1 ‘s rudeness. This obviated one of the primary justifications for the process..

He argued that any technical arguments made to justify the value of a student hearing in this case were tenuous at best and, in no event, establish a strong enough institutional interest to justify the intentional infliction of emotional distress certain to result from mandating participation in the process.

Michael indicated that the long-term emotional and mental well-being of CHILD 1 was at stake and that the hearing process had turned into a sanction itself, rather than simply a means to determine the proper sanction for conduct CHILD 1  admitted to and already apologized for.

Please not both the tone and content of this Email letter written by an obviously tormented father to Elizabeth English on Sunday January 12, the day before the meeting in which English refused to consider any alternatives to the public shaming process. The letter explains why the Josephsons who had always supported discipline when any of their children misbehaved and repeatedly supported discipline in the case of C1’s rudeness were adamant that a process that would cause their daughter sever and lasting injury was inappropriate.

Elizabeth, you know Anne and I are very familiar with C1’s stubbornness and I have typically been very hard on her when [we] think her actions are willful. We are at this juncture in the process because, this time I truly believe this is not willful stubbornness but an emotional crisis that must be handled with great sensitivity. . . . It is as if she feels she is a volcano that will disintegrate if all the emotions she is struggling so hard to control uncontrollably erupt. I am not talking about anger I am talking about excruciating humiliation and fear. . . .

You are far more familiar with adolescents and their defense mechanisms than I am but I find it hard to deal with the emotional roller coaster. Most of the time C1 seems fine to me. Thank God, she is eager and anxious to get back to school and she is interacting positively with her friends.  But when I try to direct her to any aspect of the upcoming meeting and your impending decision on our request for an alternative process of determining the sanction for her inappropriate behavior, she becomes so anxious that she either shuts down, melts down or refuses to deal with it. . . .

I can’t even fathom the short and long term impact of being denied the opportunity to graduate with her class, not dance with her classmates, and perhaps to lose her admission to Barnard.

I pressed her very hard ‘to suck it up and just do it’ and though Anne and I tried to convince her that this alternative is far worse than whatever may happen during a hearing, she says she simply ‘can’t.’

Elizabeth, you know Anne and I are very familiar with C1’s stubbornness and I have typically been very hard on her when [we] think her actions are willful. We are at this juncture in the process because, this time I truly believe this is not willful stubbornness but an emotional crisis that must be handled with great sensitivity. . . . It is as if she feels she is a volcano that will disintegrate if all the emotions she is struggling so hard to control uncontrollably erupt. I am not talking about anger I am talking about excruciating humiliation and fear. . . .

Sorry, for all the detail, but this issue has literally consumed me and Anne for weeks. As the authority and responsibility of handling the situation has been given to me, I feel burdened with the knowledge that the outcome of Monday’s meeting truly may be one of the most important events in C1’s life. If that sounds like hyperbole, just think about the chain of events that may flow from it.

To give her the best chance of a good result, I am committed to doing anything and everything I can to be sure you have all the information you need to justify a decision to grant our request to collaboratively find an alternative means of determine the sanction for her past misconduct. . . .

Thank you for your understanding,