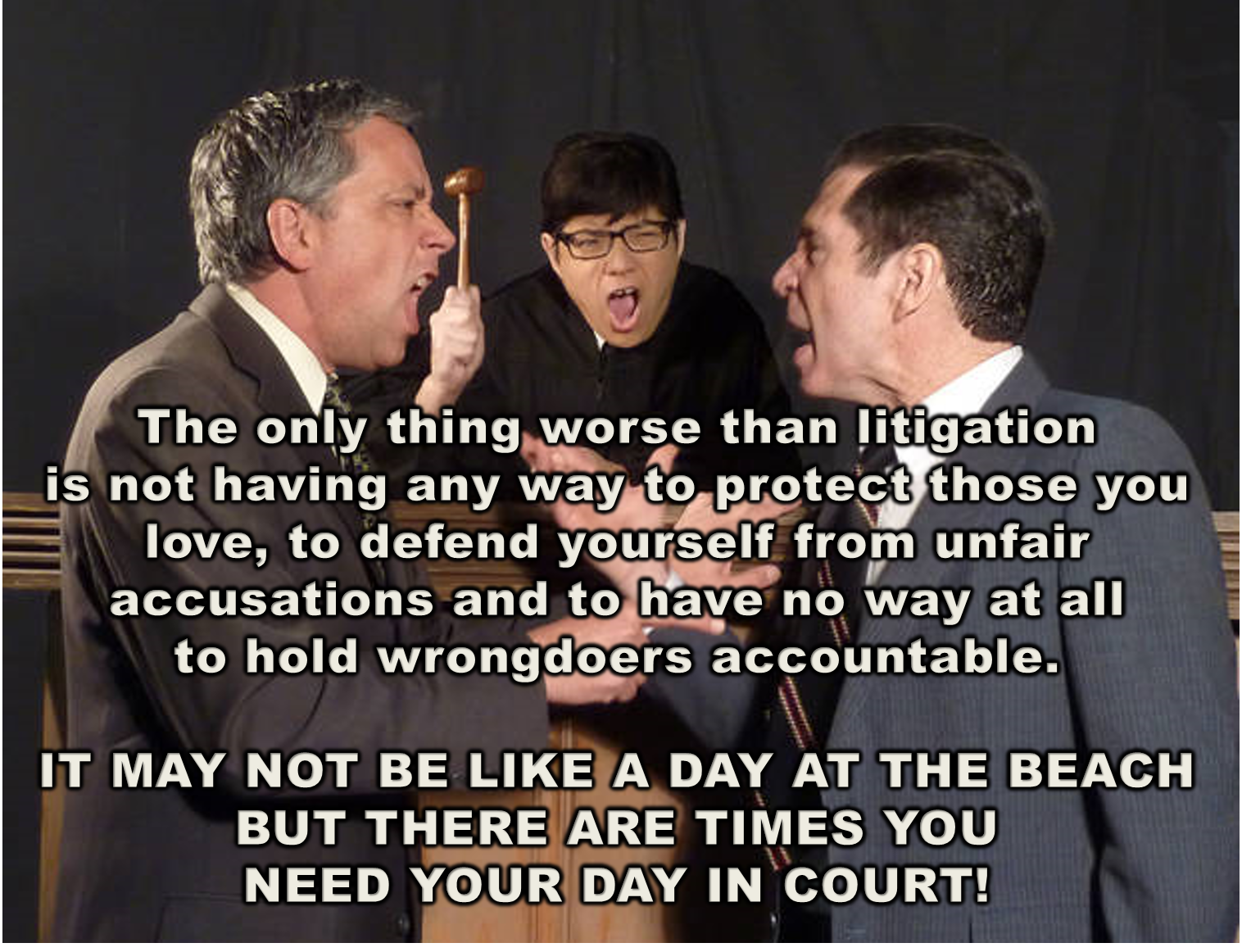 On August 26, 2014 Charles Harder, for Anne Josephson and Children 1 and 2 and Michael Josephson, in pro per, presented their arguments opposing the efforts of Ms. English and the board to force the Josephsons’ case into secret arbitration proceedings. What follows is a link to the transcript of the oral arguments, including defendants’ response and Michael Josephson’s Outline of the oral Argument  — including all the things he meant to say but did not get to.

a. Public accountability is a deterrent – the defendants’ obsession with trying to keep our grievances a secret demonstrates how important it is to them that that no one knows what we claim and whether our claims were proven.

1) The school claims confidentially to insulate themselves from scrutiny and criticism.

2) if we learned anything from the Sandusky case is that the public needs transparency not secrecy, especially from institutions dealing with children.

b. This is a legitimate and time-honored use of our judicial system, but if the defendants’ efforts to force us into arbitration succeed, we cannot do this NOR WILL ANYONE ELSE. The law will remain static or continue to support secrecy and unaccountability

c.   Law and Public Policy. If we were allowed the benefits of the public judicial process we could clarify the law in a way that would affect public policy and the practices of private schools.

1) Educator malpractice. We could establish a standard for educator malpractice based on the fiduciary duty of educators and the application of a professional standard of care in administering discipline and punishing children for perceived insubordination of their parents.  This could prevent school administrators with the disposition of one of the great movie villains of all time: Nurse Ratched (“One Flew Over the Cuckoo’s Nest”) from bullying and browbeating parents and staff.

b. Alienation of Child. We could create a legal precedent that would forbid and educator from deliberately and vindictively seeking to drive a wedge between a student and her parents.

c. Threatening Litigation. We could clarify the law so it was clear that an administrator cannot terminate an enrollment contract or dismiss a student because a parent indicated the possibility of exercising the constitutional right to bring a legal action.

d. Change Board Governance. If we could succeed in doing their we could change board governance of private schools dramatically and bring it into line with the current law in the corporate world imposing a rigorous duty on boards to provide meaningful  oversight and guidelines and internal controls to prevent wrongdoing.

10. Limitations that would prevent us from proving our claims

a. Discovery. In court we would not have to ask permission to file requests for admissions, propound interrogatories and take whatever time we needed to get complete depositions. Based on current strategy defendants are certain to seek to limit our discovery in any way.

b. Protection of witnesses. Some of our witnesses will be current parents and employees who fear retaliation if they testify honestly, a court can devise and impose a protective order, without permission of both sides, an arbitrator cannot.

c. Cost of Arbitrator. In arbitration we would be forced to pay the arbitrator $4,000 a day (our share of the typical $8,000 fee) to hear our motions or those propounded by the defendants (who have proved their willingness to inflict costs on us with their completely frivolous attempt to get a gag order).

d. Attorney fees. In court we would not be subject to the defendants’ overt threats that if they prevail we could be ordered to pay their attorney’s fees which we were told already amount to $200,000.

a. Let me quickly say I don’t mean you personally, Your Honor, I mean the LAW.

b. I respectfully contend the law in this area has strayed from the truth and defies common sense and that you have the jurisdiction and justification to begin the process of returning to truth.

c. This is important to our family, not because the truth will set us free, but because it will keep us in court.

12. Legal Fictions. Until I buried myself in researching the law of arbitration I did not know and never would have imagined all the things the “law” pretends not to know and the number of clearly false statements it says is true.

b. The arbitration process only favors Archer. According to the law, an arbitration provision is unconscionable if it unfairly favors the party who wrote the form contract. The test is balance – are both sides given essentially equal burdens and benefits.

1) But why does the “law” pretend not to know that including the arb clause in the take it or leave it contract is itself unconscionable because it forces parents to give up rights they shouldn’t have to.

2) There is no advantage whatsoever for mandatory arbitration to the parents, parties most likely to want to arbitrate a grievance.

3) If properly advised and free to do so, no parent would agree to this one-sided provision which limits their rights with no off-setting benefit.

c. Challenging the arbitration provision prior to signing the contract would be futile and foolish. The law pretends not to understand the practical but certain reality that a parent has no leverage, no bargaining power and that even questioning the arb clause (or any other clause in the form contract) would only identify the parent as a troublemaker and jeopardize their children’s status at the school.

1) Because we’ve been denied discovery by defendant’s motion to stay the proceedings, we can’t yet prove what is obvious (though the defendants smugly imply otherwise) no one ever tries to negotiate or question anything in their form contract, including the arbitration clause and if they did, especially at Archer, the school would invite them to go elsewhere. (not an option since other schools have similar provisions)

2) Reality check. Does the court really have any “real world doubt” that the school never has, and their lawyers would not ever let them, negotiate the arb clause? Yet, the case most relied on by defendants suggests that a parent’s failure to offer evidence that they tried to negotiate the provision precludes a conclusion of substantive unconscionability.

d. Secrecy/lack of transparency. How could any parent know that the school would assert and the courts have upheld the claim that the arbitration clause, which on its face seems to be about the contract, would prevent a parent from seeking judicial relief if there child were molested? Even with my legal background, I never imagined that the Archer would claim and the courts would uphold that even intentional torts and criminal acts like those committed by Jerry Sandusky are arbitrable.

1) I know defendant’s lawyer will argue that my subjective interpretations of phrases like “arising out of the contract” are irrelevant in a legal world that calls lies and false statements of facts, “fictions”, but if given a chance, I will testify under oath that as a former law professor I did not understand this phrase to be so broadly construed. In fact, when a lawyer first told me that such interpretations have been upheld by the courts I did not believe him.

2) remember the basic “meeting of the minds” test? Not as interpreted by some courts but as intended to require a real, honest to God agreement, not the fictionalized “gotcha” interpretation based on the simplistic reasoning:  you read it,  you signed it, you’re bound by it.

e. The final audacity. Why would courts allow parties to abandon any semblance of common sense and fairness by suggesting that a provision that says that only the arbitrator can decide f whether a claim is arbitrable?  Can one imagine a greater conflict of interests and denial of due process?

13. Why people sign form contracts. We sign form contracts all the time when we click the “I agree” box for every piece of software we’ve downloaded – we assume that two things protect us from the possibility that we sold our children – 1) a belief that the marketplace would prevent a company from being really unreasonable and 2) if a provision was too oppressive or overreaching it would not be enforceable under the doctrine of unconscionability

a. Problem is that neither of these safeguard apply to increasingly restrictive arbitration clauses including the one written by the defendants’ super lawyers:

1) The marketplace provides no check on overreaching clauses because everyone in the industry wants these clauses – why wouldn’t they and every private school has them. Try to find a quality private school without an arbitration clause that effectively insulates the school from accountability or liability

2) The assumption that really unfair provisions won’t be enforceable, at least in this area, has been obliterated by a succession of appellate court cases that favor arbitration so much that the courts turn a blind eye to the inherent unfairness of requiring parents to forego the processes of our judicial system.

14. This case is of great public significance.

a. Over 1/3 of all schools in the U.S. are private schools and 10% of all students attend these schools.

b. If this court continues the “blind eye” approach to arb clauses used by private schools, the critical judicial safeguards against abuse will be lost as every parent is forced to bargain them away for a chance to get their kids in the school they have chosen.

c. The cruel and vindictive abuses of power that damaged my family in this case were very serious but if schools are not held publicly accountable, the worst is yet to come.